A trip to the jungle is the theme of the King Kong Cash slot, a vibrant game inhabited by some interesting characters. Blueprint Gaming has designed a brilliant cartoon take of the King Kong genre, where the mighty gorilla's snores echo throughout the gameplay.
Wake him up, and this pleasant King shares some rewarding features, that makes a trip to the jungle a must for all.
Make sure to check out some of our other game reviews as well, like Book of Oz from Microgaming.

The 5 x 3 reels, surrounded with bamboo, are set in a jungle clearing where you will see King Kong snoring away on his chair to the left.The game is medium-high variance with a decent 95.79% RTP, but what makes you want to enter this jungle abode are the ingenious modifiers and bonuses that can be found there. 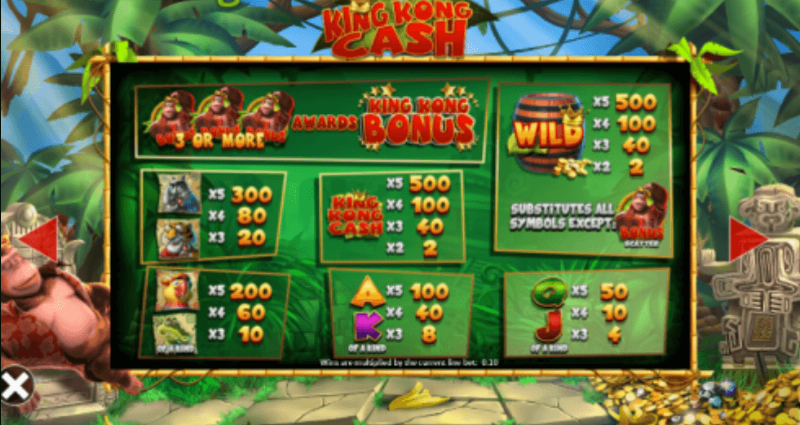 The top paying symbols are theme related and include a cheerful crocodile and perky parrot who pay from x10 - x200 your line bet for placing 3 - 5 on the 20 fixed paylines. Then we have a cigar smoking rhino and a pipe smoking tiger who will pay out x20 - x300 your line bet, for 3 - 5 appearing on an active payline. The highest payout can be achieved by placing 2 - 5 of the game’s logo on the paylines with x2 - x500 your line bet available.

Two special symbols to look out for are the bonus and the wild. The wild is represented by a barrel with the word ‘wild’ on, and it will substitute for all the symbols but the bonus symbol. The head-scratching gorilla with the word ‘bonus’ is also one to watch out for, as three of him initiate the base game reel modifiers, that really gets the adrenaline flowing.

Now no-one in their right mind would want to wake a sleeping giant, but that is precisely what you want to happen in King Kong Cash! Why? Because once awake, he can add some extra features to the reels in the Sleepy Kong Bonus. These include;

Banana Canon Wilds - King Kong fires his banana cannon to distribute wilds on the reels. He can also have a ‘hissy fit’ and stamp around, creating respins for you where the wilds are held in place.

Golden Barrel Super Spin - where Kong throws golden barrels onto the reels, which transform into the same symbol.

Kong Re-Spin - a free spin is given.

King Kong Streak Bonus - once the reels have stopped spinning with a winning combo, King Kong occasionally decides to smash them with a mallet. This produces re-spins, with the triggering symbols held in place until the win cannot be improved any more.

Opening a bonus game is always exciting, Blueprint Gaming have made it more so with their King Kong Cash Bonus. Five different bonuses are available, and you get in on the action by spinning the wheel to see which one you will get.

King Kong Trail Bonus - an arcade-style game where a bomb will end the round.

Golden Kong Free Spins - played on 5 x 4 reels with 40 paylines. Collect wild symbols each round to enter a Wild Spin round.
The bonus features are played on different screens, each with their own exciting adventure.Playing the Barrel Blast and King Kong Trail can take you to the fifth bonus, the King Kong Cash Big Monkey Bonus. Here, playing with barrels and bananas can bring about an x1,000 total bet win. 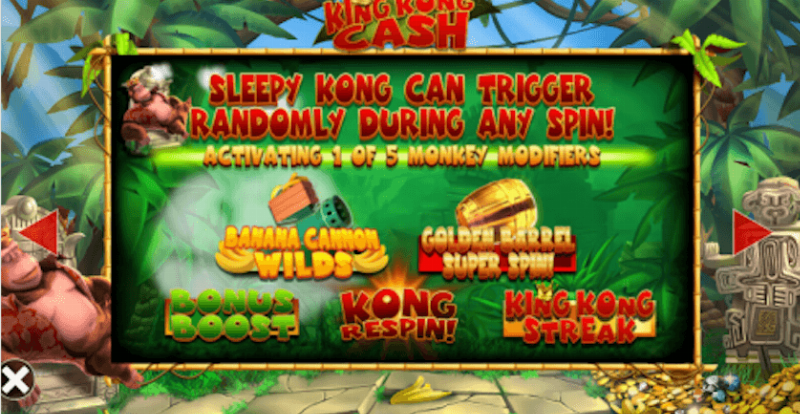 In the King Kong Cash bonus feature you can also up the adrenaline factor and take a gamble. Once you spin the wheel you can choose to collect and play the feature it lands on. Alternatively, you can gamble and try to win a different feature, except for the Big Monkey Bonus. As long as you don't land on a Mystery Win segment, you have the chance to find a feature you prefer. Land on a Mystery Win segment and you will receive a cash prize, and the bonus round is over.

Like a lot of Canadian players, we like the choice to play on our mobile devices, and King Kong Cash is optimized to let us do just that. The graphics and features work well on the smaller screens, meaning you can pop over to the jungle and try to wake the King whenever you want. Don't forget to take some bananas!

King Kong Cash might look like a classic game, yet it is anything but; it is a riotous ride with modifiers and interactive bonuses that capture the attention and don't let go. This is one jungle game well worth visiting, plus, in this jungle all the animals are friendly and there are no mosquitoes there!

The betting range is suitable for all budgets, ranging from $0.20 to $200, remember that payouts are based on the line bet; your bet divided by 20. The intricate bonuses and the fun animations make this a laugh-out-loud slot to play, with some serious rewards. Don't worry if you are new to playing slots. While it may sound complicated, Blueprint Gaming designers have provided a flow to the King Kong Cash slot gameplay that any level of player can follow and thoroughly enjoy - we certainly did!

We use cookies to improve the visitor’s experience of our website. You can choose to turn off this feature through your browser settings.
Read more about cookies